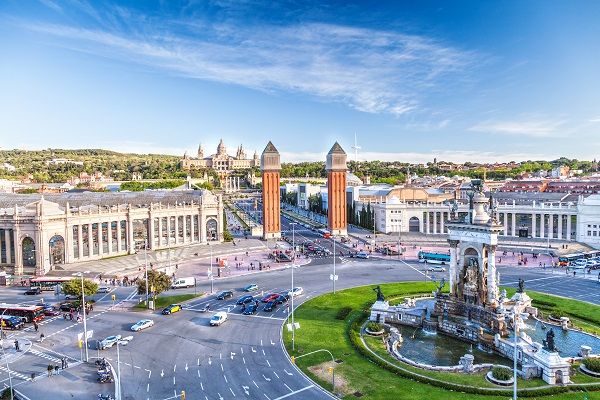 Plaza España is one of the most important places in Barcelona. Gateway to the Magic Fountain of Montjuic and a major transport hub. It’s one of the biggest touristic places of the city, featuring many attractions and places of interest.

Things to do in Plaza España To begin with, the Magic Fountain is one of the greatest shows in town. A beautiful display of water, lights and music and a free entrance. It’s one of the highlights in Plaza España. Designed by renowned architect Mies van der Rohe for the 1929 International Exhibition, it became a model for the International Style, which turned into the most popular architectural trend in the 20th century. It’s one of the biggest architectural landmarks in the world. A former bullring left to oblivion, Arenas de Barcelona was turned into a modern shopping centre, while retaining the original facade on the outside. Besides the large array of shops and restaurants, there is a high profile gym, a cinema and the terrace on the rooftop overlooking the square. Located in Montjüic, the MNAC was originally built for the 1929 Exhibition as well, and today it displays a large amount of Gothic, Romanesque, Baroque and Renaissance collections, definitely one of the best museums in Barcelona. Free entrance with the Art Ticket. Poble Espanyol is an open air museum of Spanish architecture, reproducing famous buildings and streets from all over Spain, all packed in the same location. The museum is filled with typical Spanish handcrafts stores, souvenirs, and from time to time, concerts and exhibitions. How to get to Plaza España

Buses 13, 50, 91 and H12 take you directly to Plaza España. For example, you can take bus #50 if you’re in Sagrada Familia for example and bus H12 is also a great option as it connects Plaza España with many other Barcelona landmarks such as Agbar Tower.